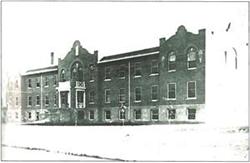 The old Mercy Hospital building had played a key role in Nampa's history, serving as Nampa's first hospital, and one of the only buildings in Nampa designed by one of Idaho's leading architectural firms of the 19th and 20th Century- Tourtellotte and Hummel. The building sat vacant for several years before it burned down in 2016.  Prior to the fire and the complete demolition of the building, the Urban Renewal Agency worked to create an urban renewal district around this property for future rehabilitation or redevelopment.

The Nampa Development Corporation initially worked in partnership with Community Development, Inc. with their plans to restore the old Mercy Hospital located on 16th Ave South. This project was slated to convert the derelict historic Mercy Hospital into 50 senior housing apartments. Approximately 80% of these units would have been reserved for low income seniors and the remainder would have been rented at market rate.


History of the Project Funding
The project would have required an estimated $7 million investment to completely rehabilitate the structure. The investment would have included facade restoration, as well as asbestos and lead abatement, installation of a new roof, mechanical work, electrical work, masonry and foundation work.

In order for the project to be realized, the developer was going to utilize low income housing tax credits, historic preservation tax credits and private financing. In order to successfully access the low income housing tax credits administered by Idaho Housing and Finance Association, local community matching dollars were required. Competitive applications required a minimum of 5% local match. Creating a new urban renewal district provided the opportunity to obtain these funds at no cost to local taxpayers through a reimbursement contract for future tax increment.

The district would only encompass the single parcel on which the project was located and the necessary public right of way for water line upgrades. Urban renewal funds would be used to reimburse developer paid expenses for public infrastructure associated with the development and historic facade restoration.

Public infrastructure improvements would have included water upgrades and traffic or streetscape enhancements.


History for the Project Process

City Staff drafted the Historic Mercy Hospital Plan in the fall of 2012. On November 5, 2012, City Council passed an ordinance approving the urban renewal district boundaries and declaring the area deteriorated. The Plan was approved by NDC on November 7, 2012, and on Nov. 27, the Planning and Zoning Commission determined the Plan's conformance with the City's 2035 Comprehensive Plan.

​Current Day
After the fire of the Old Mercy Hospital, the owner chose to demolish the remaining structure. A senior-housing development was opened on the site in June of 2019. Local television station KTVB covered the history and grand opening of the project in a segment that can be seen here.

The City of Nampa offices will be closed Monday, July 4, in observance of Independence Day.

The next Nampa City Council meeting will be Tues., July 5 beginning at 5:30 pm for regular business and 6:30 pm for public hearings.