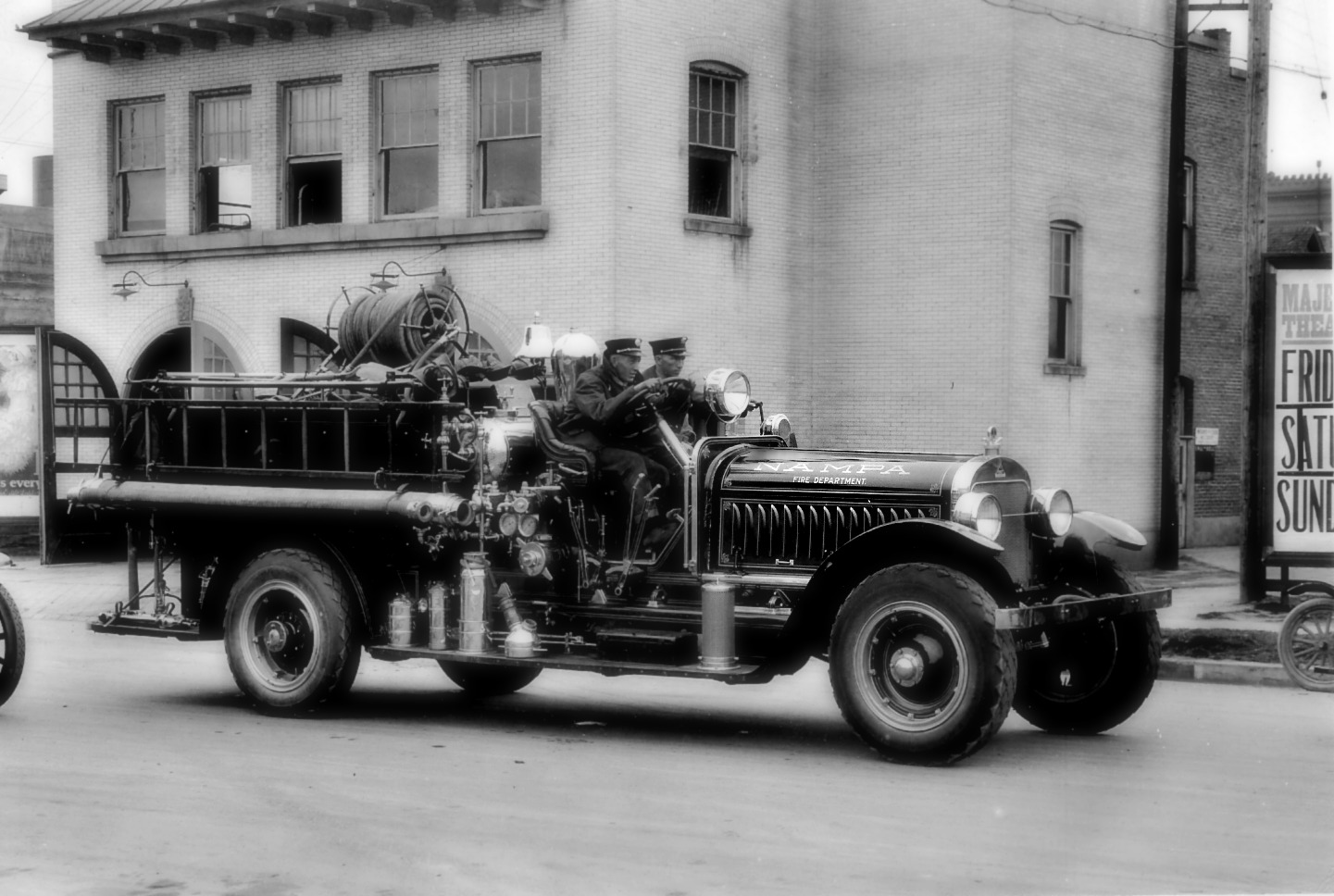 The history of Nampa’s Fire Department doesn’t start until 1883, during the westward expansion. That was when the railroad laid its tracks through the Northwest Territory of Idaho. The Oregon Short Line Company built a water tower and bunk house for its work crew in the southwest corner of the soon to become state. The name of the water stop was Nampa.

Alexander Duffes was a town builder, and on a speculative gamble he homesteaded near this watering station of the railroad. Paying $1.25 per acre for 160 acres, totaling $200, and living on the property for eight months, he was able to start his town. Mr. Duffes took in an associate, Mr. Stewart, and together they organized the “Nampa Land and Improvement Company,” filing plat and Articles of Incorporation for the new town on September 9, 1886.

Soon to come was a signed request from the citizens of Nampa’s water stop, to the commissioners of Ada County, (Canyon County had not yet been formed), to establish a town government. The commissioners granted the request on April 17, 1891. Appointed as town trustees for the first year were: A. McGee, John E. Stearns, R.W. Purdum, Jefferson Waterhouse and L.J. Talley.

In one of their early town meetings, dated April 22, 1891, Chairman John E. Stearns introduced ordinance No. 9, which read: “Providing for the protection of property against fire”. The ordinance was read for the first time, and all other members concurred. It was read for the second time and passed. This was the first act of the town in providing for fire protection for its citizens.

The first fire station was started August 6, 1891 when Mr. Purdum motioned and was seconded by McGee, that the clerk be ordered to advertise for bids for a lot and building suitable for an engine house. It was further stipulated that the building be opened by September 1891, and to take town warrants for its payments. The structure was a wooden frame, one room, one story building which was heated. Located on the front gable was a bell tower. The building was used for city meetings and record keeping, voting polls, and also served as the town maintenance building. The engine house was located at approximately 1213 1st S. South. The location was in the heart of old downtown Nampa.

The first horse drawn fire engine came about when Mr. Stearns made a proposition to the board of trustees in May of 1891. His proposition was that if the citizens of Nampa would purchase a chemical fire engine and christen it “John E. Stearns”, he would donate $100.00 to the cost. In 1892 the “John E. Stearns Chemical Fire Engine No. 1”, was christened and arrived in Nampa. The total cost of the engine with shipping was about $1000.00.

The new engine’s first call was to the Falk Mercantile Store. The volunteers found it was not an easy job to pull the equipment by hand, so a standing offer was made to pay $1.00 to the man who relieved the hand pullers with a team of horses. When the alarm of fire went out, it was a race by the volunteers to the livery stables first, then to the fire equipment, and finally to the fire.

Up to this time the only fire protection the citizens had were 12 leather buckets that the board of trustees purchased for a bucket brigade. Later, purchases of 24 more buckets were made. In this first fire station other equipment included: 2 hooks with rope, 2 twenty foot ladders, 6 fire axes, 2 fourteen foot pike poles, and 3 large ladders.