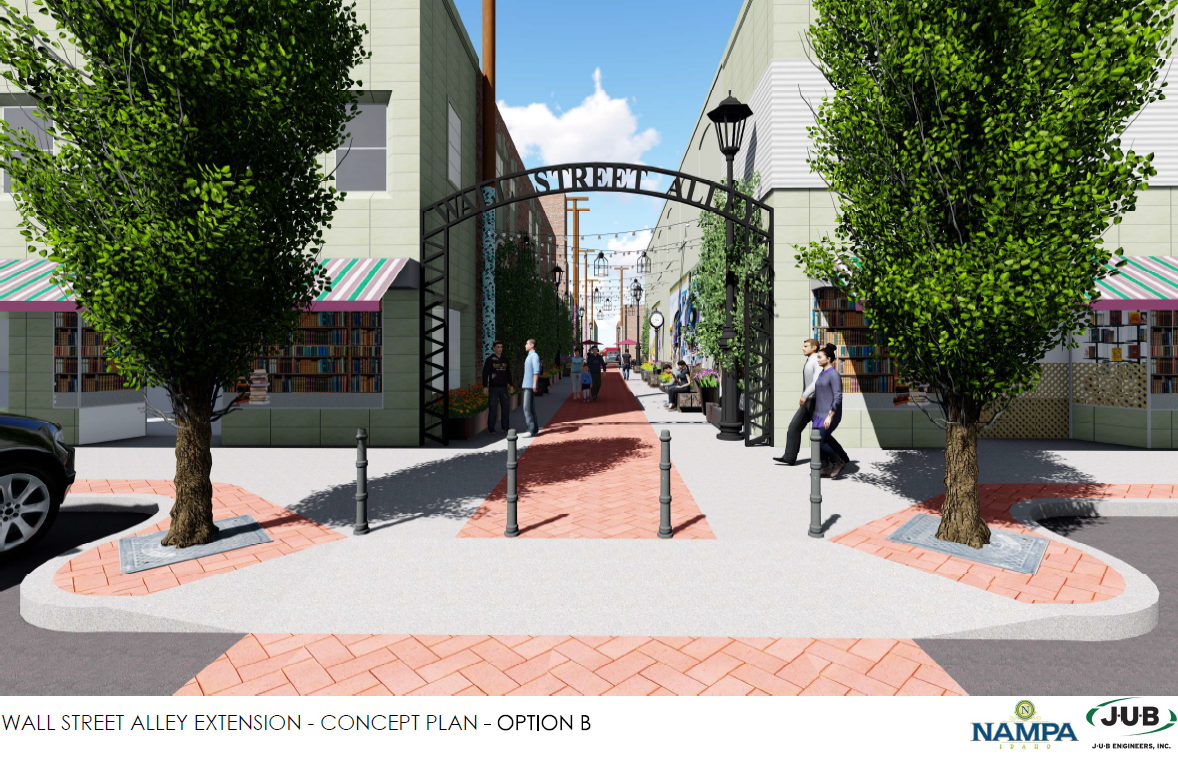 Since the early 1980’s, merchants, in association with city staff and city officials, have taken on major Downtown improvement projects that have set the stage for the continued vitality of the Downtown Historic District.

Two years later, in 2017, over 25 people came together to participate in a Wall Street Steering Committee and, working with JUB engineering, created a long-term conceptual development plan for Nampa’s Wall Street. This design was driven by desire from the public to redevelop and revitalize Downtown with a particular focus on 1st Street and connectivity to the south toward 3rd Street. There were efforts at that time to solicit grant funding for the concept, which were unsuccessful, but the desire for redevelopment continues to remain strong.

The 2017 concept design included three primary phased upgrades from Front Street all the way up to 3rd Street South. Currently, we are looking at implementing a portion of Phase IA from 1st Street South to 2nd Street South.

This reduced version of Phase IA would transform the area into a more desirable, active and walkable access way, creating a pedestrian-only area, starting at 1st Street South and extending southward approximately 110 feet to the back of the buildings facing 1st Street South. The remaining alley way would be accessible to vehicle traffic. In order to facilitate larger delivery vehicles, the revised traffic pattern would include a “U-Shaped” turn area in the Stampede Parking Lot off of 2nd Street South. The project involves upgrading the utilities located under Wall Street from 1st Street South to 2nd Street South, installing hardscape design of colored brick pavers and concrete ribbons (designed as an homage to our history as a railroad town), decorative streetlights, and removable bollards. Trees, shrubs, art, street furniture and façade improvements would be funded through private or grant monies.

This project is supported by multiple city-adopted plans and is specifically identified as a top initiative in the 2017 Nampa Economic Development Plan. The purpose of the project is to address blighted conditions by providing a safe, walkable connection from the existing Wall Street pedestrian path through to 2nd Street South. Current conditions include lack of lighting, inadequate drainage/flooding issues and cracked asphalt, resulting in an uninviting, un-walkable pedestrian corridor surrounded by restaurants.

The project would provide numerous benefits to the surrounding Wall Street property and business owners, the downtown corridor, as well as the public.

Project funding is planned to be a combination of public and private funding. Utility upgrade funding can be funded through the water and sewer enterprise funds as a component of the regular lifecycle upgrades conducted. Potential funding for hardscape improvements are anticipated to come from a variety of sources such as private sector participation and/or grant funding.

Various public involvement efforts have occurred for the Nampa Wall Street Extension project since its inception in 1985. These include:

The City of Nampa, as well as stakeholders have expressed strong support of extending and improving connectivity to the Wall Street alleyway. 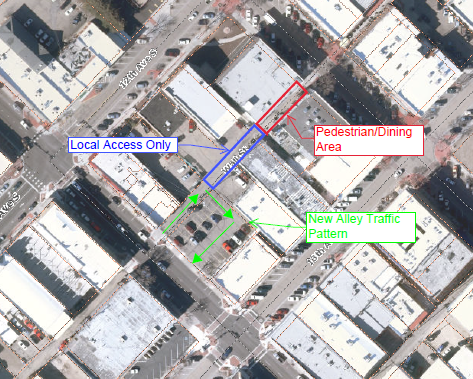 For comments or questions please contact Tiffany McCree at mccreet@cityofnampa.us or call 208.565.5262