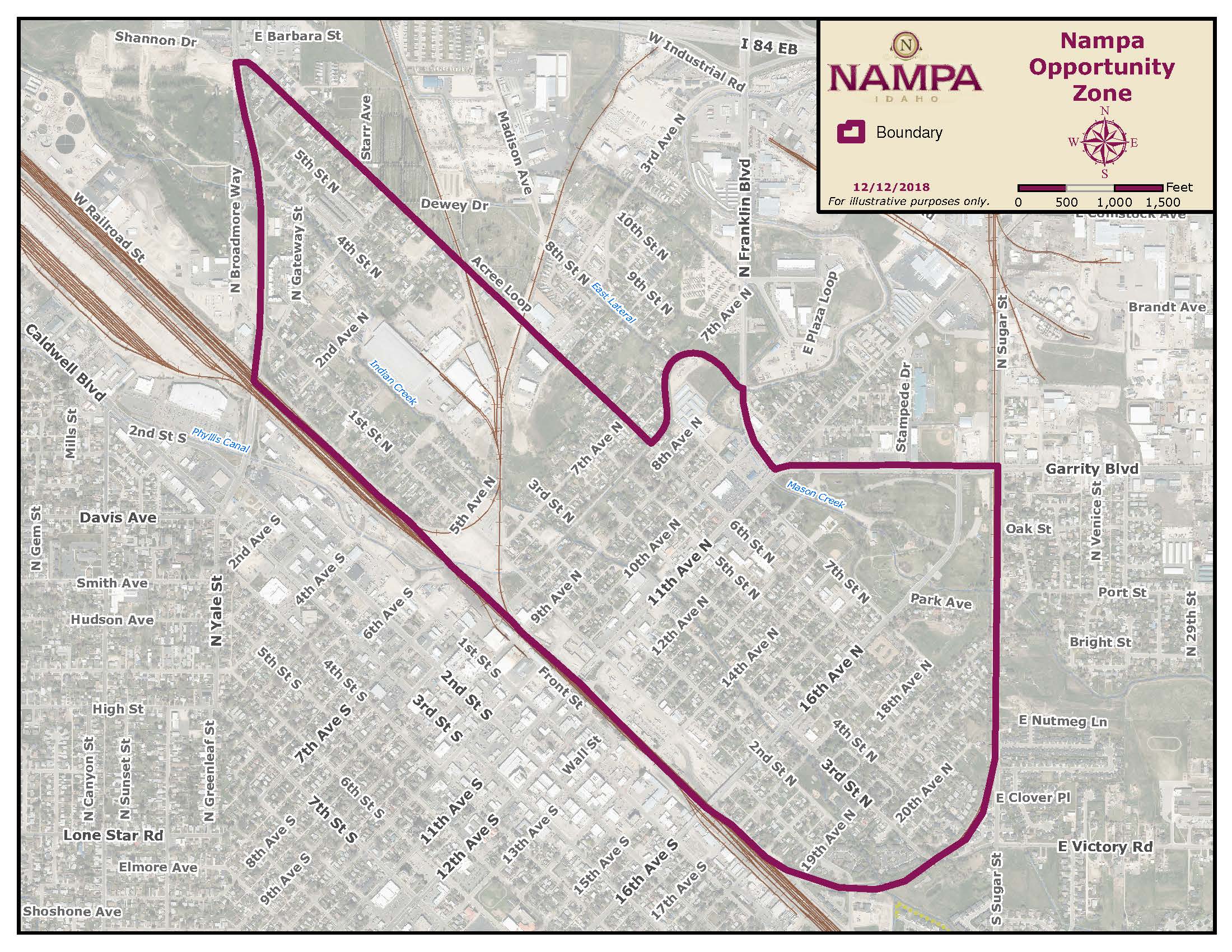 Opportunity Zones are defined by the IRS as “an economically-distressed community where new investments, under certain conditions, may be eligible for preferential tax treatment."

In the spring of 2018, Governor Otter named North Nampa one of Idaho’s 28 Opportunity Zones.

Opportunity Zones are a new economic development tool which provides tax incentives for investors to develop in targeted areas. The tax benefits include deferring and reducing capital gains on a sliding scale based on length of time the property is held. Tax incentives are outlined on the IRS website.

Economic & Community Development Director Beth Ineck said, “North Nampa is one of our oldest neighborhoods and has not seen significant investment activity for many years. Designating North Nampa as an Opportunity Zone provides investors an opportunity to offset floodway related costs and potential challenges associated with older structures.”

Opportunity Zones, created by the 2017 Tax Cuts and Jobs Act, were designed to spur investment in distressed communities throughout the country through tax benefits. Under a nomination process completed in June, 8,761 communities in all 50 states, the District of Columbia and five U.S. territories were designated as qualified Opportunity Zones. Opportunity Zones retain their designation for 10 years. Investors may defer tax on almost any capital gain up to Dec. 31, 2026 by making an appropriate investment in a zone, making an election after December 21, 2017, and meeting other requirements. In October, the U.S. Department of the Treasury and the IRS released proposed regulations on Opportunity Zones designed to incentivize investment in American communities. The Treasury Department plans on issuing additional guidance before the end of the year after notice and comment.

PRESIDENT DONALD J. TRUMP IS LIFTING UP AMERICAN COMMUNITIES THAT HAVE BEEN LEFT BEHIND

“[O]ur tax bill also creates new opportunity zones rewarding those who invest in distressed communities and create more jobs for those who have, too often, simply been left behind.” – President Donald J. Trump

President Trump is signing an Executive Order establishing the White House Opportunity and Revitalization Council. The Council will be chaired by the Secretary of Housing and Urban Development, Ben Carson, and comprised of 13 Federal agencies.

The Council will engage with all levels of government on ways to better use taxpayer dollars to revitalize low-income communities.

Lack of coordination and targeting has led to cumbersome applications, program waste, and ineffective benefits.

The Council will consider legislative proposals and undertake regulatory reform to remove barriers to revitalization efforts.

The Council will present the President with a number of reports identifying and recommending ways to encourage investment in economically distressed communities.

In 2017, President Trump signed the Tax Cuts and Jobs Act, which established Opportunity Zones to incentivize long-term investments in low-income communities across the country.

LIFTING UP COMMUNITIES: Opportunity Zones help drive economic growth and lift up communities that have been left behind.

Opportunity Zones are a powerful vehicle for bringing economic growth and job creation to the American communities that need them the most.

On average, the median family income in an Opportunity Zone is 37 percent below the state median.

The average poverty rate in an Opportunity Zone is 32 percent, compared with the national rate of 17 percent.

The City of Nampa offices will be closed Monday, July 4, in observance of Independence Day.

The next Nampa City Council meeting will be Tues., July 5 beginning at 5:30 pm for regular business and 6:30 pm for public hearings.